SIMON PENNY AT SCREEN FROM BARCELONA

SIMON PENNY AT SCREEN FROM BARCELONA

Interactive Visions aims to analyze the role of interactivity in relation to video, and, therefore, the possibilities and reasons for the existence of interactive video. While video is essentially a pre-recorded image, the more interesting interaction, as an artistic proposal, is that one that can find the right balance between predictability and randomness. This type of interaction must be defined and put in the context of the moving image that, strictly speaking, is neither video-art nor video-games. The place of interactive video is somewhere between these two disciplines that are well established and consolidated.

Organizers: Master in Digital Video, specializing in Digital Cinema and Interactive Video of the Universitat Pompeu Fabra together with Screen from Barcelona.

Participants: Simon Penny (University of California, Irvine) and Joan Soler-Adillon (Universitat Pompeu Fabra). Simon Penny is an Australian artist, theorist, lecturer and curator in the fields of Digital Cultural Practices, Embodied Interaction, Art and Technology and Interactive Art.  His art practice consists of interactive installation and robotic art utilising custom sensor and robotic technologies.  He is co-developer of the TVS multi-camera 3D machine vision system.  His works have been exhibited at ZKM, Ars Electronica, the Australian Center for the Moving Image (ACMI) and elsewhere.  He has published essays on digital culture since 1987 (translated into eight languages) and has spoken widely on Electronic Media Art around the world.  He edited the anthology Critical Issues in Electronic Media (SUNY Press 1995).  He curated Machine Culture (arguably the first international survey of interactive art) for SIGGRAPH 93.  Penny is Professor of Arts and Engineering at University of California Irvine.  He is architect and founding director of the transdisciplinary graduate program ACE (Arts, Computation and Engineering) at UCI.  Through the 1990’s he was Professor of Art and Robotics at Carnegie Mellon.

After graduating in Philosophy from Universitat Autònoma de Barcelona, Joan Soler-Adillon obtained Master’s degrees from New York University (Interactive Telecommunications Program; Tisch School of the Arts) and from Universitat Pompeu Fabra (Cognitive Systems and Interactive Media).  He is currently a lecturer and researcher in UPF’s Communication Department and is the Program Director of the Master in Digital Video.  He also teaches in Elisava, the Master of Digital Art and the Online Master of Digital Documentation in UPF and in Ecuador’s USFQ.  He has participated in interactive installations, performances and video projects, which have been shown in New York and Barcelona, and has, as well, participated in several workshops and conferences around the world. 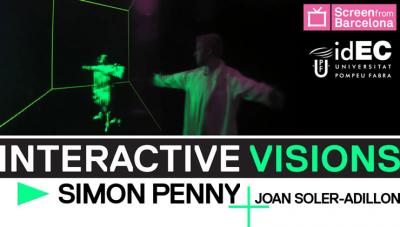