Cindy Bernard is known for photographs and projections that explore the relationship between cinema, memory, and landscape including the widely exhibited series Ask the Dust. In addition to her visual practice, Bernard is creator of the experimental music series sound. as well as the founder of The Society for the Activation of Social Space through Art and Sound (SASSAS). Taking an active interest in instigating social exchange, Bernard founded SASSAS out of the need for a small sustainable organization dedicated to experimental music in Los Angeles. As director of SASSAS, Bernard has produced concerts and sound events at the historic Schindler House in West Hollywood as well as at REDCAT and the Ford Amphitheatre working with artists such as Glenn Branca, Harold Budd, Nels Cline, Petra Haden, Joseph Jarman, Pauline Oliveros, Tom Recchion, Wadada Leo Smith, James Tenney and Roscoe Mitchell.

Her interest in music and the public commons has spurred two projects: a series of photographs of municipal band shells which Bernard sees as an architecture of public exchange, most recently exhibited at Tracy Williams LTD in New York; and The Inquisitive Musician? a collaboration with artist and translator David Hatcher based on a 17th century German satire, Musicus Curiosus, or Battalus, the Inquisitive Musician?, the Struggle for Precedence between the Kunst Pfeifer and the Common Players. She is currently completing Year Long Loop, a year long documentation of the view and sounds outside her Los Angeles home. 24 hours in length, she describes it as a cross between John's Cage's 4'33" and Andy Warhol's Empire. 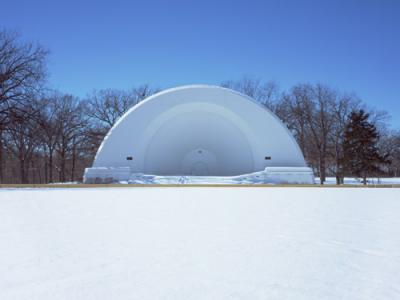