Yvonne Rainer, choreographer, filmmaker, and writer, was one of the founders of the Judson Dance Theater (1962) and the improvisational group, Grand Union (1970). Major choreographic works: The Mind is a Muscle (1968), Continuous Project-Altered Daily (1969-70), After Many a Summer Dies the Swan (2000, commissioned by the Baryshnikov Dance Foundation for the White Oak Dance Project), AG Indexical (2006), RoS Indexical (2007), Spiraling Down (2008).

Beginning with Lives of Performers (1972), she produced and directed seven feature-length films, including Privilege (1990, winner of the Filmmakers' Trophy at the Sundance Film Festival, Park City, Utah, 1991, and the Geyer Werke Prize at the International Documentary Film Festival in Munich, l99l), and MURDER and murder (1996, winner of the Teddy Award at the 1997 Berlin Film Festival and Special Jury Award at the 1999 Miami Lesbian and Gay Film Festival).  Rainer’s choreography and films have been seen throughout the United States and Europe, also in Hong Kong, Taipei, Yamagata, Sao Paulo, Rio de Janeiro,  and Capetown.

Rainer has received numerous awards and fellowships, including two Guggenheim Fellowships, three Rockefeller Fellowships, a MacArthur Fellowship, a Wexner Prize, and four Honorary Doctor of Fine Arts Degrees.  She has authored four books: Work 1961-73; The Films of Yvonne Rainer; A Woman Who...  Essays, Interviews, Scripts; and, most recently, a memoir: Feelings Are Facts: A Life.

Yvonne Rainer: Radical Juxtapositions 1961-2002,  a solo exhibition that included video installations — After Many a Summer Dies the Swan: Hybrid and Rainer Variations (a video portrait edited by Charles Atlas) — plus vintage photographs, posters, manuscripts, films, drawings, and notebooks, took place at the Rosenwald-Wolf Gallery, University of the Arts, Philadelphia, in 2002 and subsequently traveled to the Los Angeles Contemporary Exhibitions, the Haggerty Museum at the University of Wisconsin, Milwaukee, and the Carpenter Center at Harvard.

"Assisted Living: Good Sports 2" (2011), and extended versions of her earlier retrospectives, including film screenings, were presented at the Kunsthaus Bregenz in Austria and Museum Ludwig in Cologne in 2012. 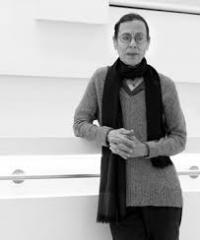