Over the last thirty years, he has made interactive and robotic installations which address critical issues arising at the intersection of culture and technology, informed by traditions of practice in the arts including sculpture, video-art, installation and performance; and by theoretical research in enactive and embodied cognition, ethology, neurology, phenomenology, human-computer interaction, ubiquitous computing, robotics, critical theory, cultural and media studies. Informed by these sources, he designs and builds artworks utilising custom sensor and effector technologies.

He built the autonomous robotic artwork Petit Mal in the early 1990s. His machine-vision-based interactive digital video work Fugitive was exhibited at the opening of the ZKM in Karlsruhe, Germany in 1997. Traces (a 3D machine-vision-driven CAVE immersive interactive) was presented at Ars Electronica in 1999. Fugitive Two was commissioned by the Australian Center for the Moving Image (ACMI), Melbourne Australia, in 2000, and premiered there in 2004. He has received funding and/or residencies from the Daniel Langlois Foundation for Science and Art (Canada), ZKM, GMD and WDR, (Germany), and other sources.

Penny edited one of the first anthologies on digital media arts Critical Issues in Electronic Media (SUNY Press 1995). He curated "Machine Culture" (arguably the first international survey of interactive art) at SIGGRAPH 93 and edited the associated catalog and anthology. He was director of Digital Arts and Culture Conference 2009 (DAC09).  He has published over 75 academic papers and has spoken widely internationally on digital cultural practices. His work is translated into several languages, including French, German, Spanish, Japanese, Korean, Finnish and Polish.

He was Associate Professor of Art and Robotics at Carnegie Mellon University 1993-1999 (a joint appointment between the College of Fine Arts and the Robotics Institute), and European Professor of Interactive Environments in the European PhD in Digital Cultures 2000-2001 (resigned). He was guest professor in the Interdisciplinary Master in Cognitive Systems and Interactive Media (CSIM) at Universitat Pompeu Fabra, Barcelona, 2007-13. In 2014, he was the first Labex Professor - a residency co-sponsored by Université Paris 8 and ENSAD (Ecole National Superieur des Arts Decoratifs).

He was architect and first director of the Arts Computation Engineering (ACE) interdisciplinary masters program at UCI, 2003-2011. He established the Electronic Intermedia program at University of Florida (1990-93). He was director of the Synergies workshop on art/science interdisciplinary research June 2013 project sponsored by EU project Softcontrol, hosted by Hangar.org, Barcelona.

He has served on juries, boards and review committees including the National Research Council of the National Academies, the Rockerfeller Foundation, Daniel Langlois Foundation for Science and Art (Canada), the ‘VIDA’ Art and Artifical Life Award of the Telefonica Foundation (Spain/Latin America), the international board of ISEA (International Symposium on Electronic Art) and the Banff New Media Institute (Canada). 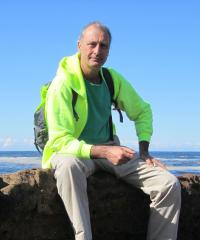