Shelby Roberts is a photographer who lives and works in Los Angeles.  He received his BFA from the School of Visual Arts, NYC in 1987 and his MFA from California Institute of the Arts in 1990.  His photographs investigate fragments of environments that humans have built:  ancient neo-lithic sites in Scotland, a vista of abandoned grain elevators from the industrial age in Buffalo, New York, or the border fence between the United States and Mexico.

Shelby has exhibited his work in museums and institutions such as the Torrance Museum of Art, Torrence, CA, the Indianapolis Museum of Contemporary Art, Indianapolis, IN,  Armory Center for the Arts, Pasadena, CA, Irvine Fine Arts Center, Irvine, CA.  His work has been exhibited in commercial galleries such as Sam Lee Gallery, Los Angeles, CA, Monte Vista Projects, Los Angeles, CA and published in “Nest” magazine.

Roberts has taught photography at University of California, Irvine since 1997. 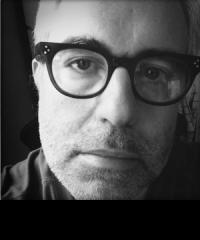