Martha Gever’s most recent public project was an exhibition of on-line video, entitled Video Dada, at UCI’s University Art Gallery (2010). Although the show dealt with the tremendous expansion of video and the place of art within this relatively new cultural arena, it also continued Gever’s longstanding involvement with independent and experimental video, dating back to the Portapak and reel-to-reel tape. She has also maintained an interest in video’s industrial counterpart, television. Her most recent critical writings deal with relationships between art and popular culture — “Like TV: On Barbara Kruger’s Twelve” (2007) — as well as cultural and political implications of various televisual phenomena — “The Spectacle of Crime, Digitized: C.S.I. and Social Anatomy” (2005) and “The Trouble with Moralism: Nip/Tuck, For Example” (2010).

Gever’s study of the intertwined histories and contours of video/television, as well as related cultural formations, has been informed consistently by various cultural-political questions: gender, race, sexuality, economic inequity. She is the author of Entertaining Lesbians: Celebrity, Sexuality, and Self-Invention (2003) and a co-editor of  Queer Looks: Perspectives on Lesbian and Gay Film and Video (1993), How Do I Look? Queer Film and Video (1991), and Out There: Marginalization and Contemporary Cultures (1990), in addition to numerous articles and reviews in such publications as Art in America, Art Journal, Discourse, GLQ, the Nation, October, and Screen.

Gever was the editor of The Independent Film and Video Monthly from 1984-1991. Prior to that she was associate editor of the photography journal Afterimage. Her critical essays have appeared in various anthologies: Mary Lucier; La vidéo, entre art et communication; Modern Arts Criticism; Illuminating Video: An Essential Guide to Video Art; AIDS: Cultural Analysis, Cultural Activism; Stolen Glances: Lesbians Take Photographs; Cultures in Contention; and Transmissions: Theory and Practice for a New Television Aesthetic. Her grants and awards include the College Art Association's Frank Jewett Mather Award for Distinction in Art Criticism, a mid-career fellowship in critical writing from the National Endowment for the Arts. 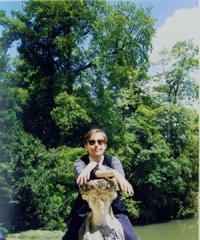