Liz Glynn creates sculpture, large-scale installations, and participatory performances using epic historical narratives, cultural artifacts, and monumental architecture to explore the potential for change in the present tense. Her practice functions as form of materialist philosophy: activating sculptures through performance, shifting materials to trace changes in value, and embodying the rise and fall of empires through cycles of actions and object production.

Glynn’s solo exhibitions include “The Archaeology of Another Possible Future” at MASS MoCA, North Adams, MA (2017); “The Myth of Singularity,” LACMALos Angeles County Museum of Art, Los Angeles, CA (2015); and “RANSOM ROOM” at SculptureCenter, NYC (2014). (OR) those at MASS MoCA, North Adams, MA (2017), SculptureCenter, Long Island City, NY (2014); Los Angeles County Museum of Art, Los Angeles, CA (2015), and those at Paula Cooper Gallery, New York, NYNYC  (2017, 2015, 2014), ; Artpace (2014); among others. She has presented created cycles of performances including [de-]lusions of Grandeur - Monumentality and Other Myths at LACMA, Los Angeles (2015-6); loving you is like fucking the dead for MoCA, Los Angeles (2011); and black box, a platform featuring 60+ artists as part of the Getty Research Institute’s Pacific Standard Time (2012). Her first public art project, Open House, was commissioned by the Public Art Fund for the Doris C. Freedman Plaza, NYC in 2017, and subsequently presented in Boston by Now + There in 2018.

Her work has been shown in at group exhibitions at venues including the Barbican Center, London UK; MoCA, Los Angeles; the Petit Palais, Paris; LUMA Foundation, Arles, France; the Hammer Museum, Los Angeles, where it was included in “Made in LA” in 2012; and the New Museum, NYC, where it was featured in the museum’s inaugural triennial, Younger than Jesus, in 2009.   She has participated in residencies at the Delfina Foundation in London, the Robert Rauschenberg Foundation in Captiva, FL; and Artpace, San Antonio, TX.  She is the recipient of grants from the of a Creative Capital Emerging Fields grantCapital Foundation, the as well as grants from the Pollock-Krasner Foundation, the the Harpo Foundation, the the Center for Cultural Innovation, and the California Community Foundation. Her work is in the permanent collections of LACMA, the Hammer Museum, the Getty Research Institute, —all in Los Angeles— - all in Los Angeles - and the Fondation Sandretto Re Rebaudengo in Turin, Italy. She is represented by Paula Cooper Gallery, NYC, and Susanne Vielmetter Los Angeles Projects.

Glynn’s work has been featured in Artforum, Art in America, frieze, the New York Times, New York Magazine, Architectural Digest, Cabinet, Even Magazine, The Guardian, and Vanity Fair, among others. Prior to joining the faculty at UCI, Glynn has taught as a visiting lecturer at Harvard College, UCLA, and Art Center College of Design, and OTIS College of Art and Design..  Liz Glynn received her Bachelor of Arts degreeBA fromat Harvard College, Cambridge, MA in 2003 and her Masters of Fine Art degreeMFA at thefrom California Institute of the Arts, Valencia, Los Angeles, CA in 2008.

Additional information including texts can be found at: 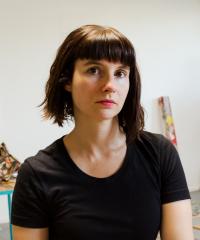