Jonathan Fineberg is Distinguished Visiting Professor at the University of California – Irvine, the Edward William and Jane Marr Gutgsell Professor of Art History Emeritus at the University of Illinois, and a Trustee Emeritus of The Phillips Collection in Washington where he was founding Director of the Center for the Study of Modern Art.  He is also a former Director on the Board of the College Art Association.

He has curated more than a dozen museum exhibitions in the U. S. and Europe and taught on the faculty at Yale and the University of Illinois before coming to Irvine, and as a Visiting Professor at Harvard University, Columbia University, Hunter College, and the Yale School of Art.  Among his awards are: the Pulitzer Fellowship in Critical Writing, the NEA Art Critic's Fellowship, Senior Fellowships from the Dedalus Foundation and the Japan Foundation, the College Art Association’s Award for Distinguished Teaching in the History of Art, and the International Association of Art Critics – USA  “Award for Excellence.”

Professor Fineberg has a persevering interest in living artists and in the neural and psychological structures of creative thinking.  His is co-author of Picasso & Jacqueline: The Evolution of Style (forthcoming from Pace Gallery and Phaidon Press, October 2014).  His book Zhang Xiaogang: Disquieting Memories (with G. Xu, Phaidon) will come out in spring 2015;  and Modern Art at the Border of Mind and Brain (University of Nebraska Press) is forthcoming in August 2015.  He is currently writing a three-volume Art of the Twentieth Century (Prentice-Hall/Pearson). 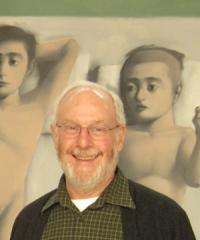