Jennifer Pastor’s research and sculpture take interest in parallel and elastic structures in disparate subjects, in how we co-create spatial metaphors and form in shared language and abstraction. Many of the forms she develops in her sculptures come from long term immersive research relationships, often imagined and built in unfamiliar destabilizing situations with complex social collaborations. Her work investigates ideas of space; reversal of polarities, armatures and deep structure, bodily boundaries of objects and people, gesture, agitated materiality, fictitious forms and anatomies, intimacy and the monumental, impossible sequences, embedment and detachment, absence as form.

Further bibliography and documentation of her work can be found at
http://www.regenprojects.com/artists/jennifer-pastor/#1 and
http://greengrassi.com/Artists?aid=20&eid=23 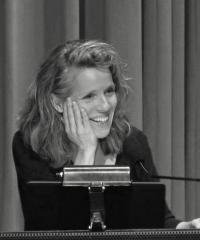