DEBORAH OLIVER is an educator, independent curator, producer, and interdisciplinary artist. Her work addresses the intersection of Performance Art and its history and practice.  In addition, her curatorial focus emphasizes the discursive exchange between live practice and audience participation. She is the curator/founder of Irrational Exhibits; irrationalexhibits.com, an immersive performance/installation exhibition series she began in 2001 at Track 16 Gallery. Since Irrational Exhibits 1st launched in 2001 there have been 9 separate exhibitions.  Over 150 artists have participated in these shows. The 10th Anniversary Exhibition will take place in June 2017, at the Los Angeles Contemporary Exhibitions. This anniversary project is funded by a grant from the Metabolic Studio.

Oliver’s work spans the realms of action and production pedagogy and curatorial practices. Oliver teaches Performance Art, the History of Performance Art, New Genres, and Performance and the Camera. In her Performance Art classes, she collaborates with her undergraduate students to present quarterly student public performances, presenting over 40 public events since 1998. She recently co-founded “The Art of Performance in Irvine,” an annual performance event, at UCI in the Experimental Media and Performance Lab.  The 3rd edition will take place in the Fall 2017. Oliver co-curated “Un-Space Ground”, a site-specific public visual and performance event. This event was in coordination with Ed Woodham from Art in Odd Places in NYC for The College Art Association (CAA).  It was part of a symposium on “Art in the Public Realm.” She was commissioned by the CAA to produce a documentary on this performance.
Other selected curatorial works include; co-curator for REDCAT’s quarterly Studio series featuring an interdisciplinary mix of experimental performance; curating a multi-media performance R.A.W., for the Pasadena Arts Alliance at the Bingo Building in the Brewery, LA; XX: The Happening, Los Angeles Exhibitions 20th Anniversary; October Surprise, LA Freewaves Video Festival at California Plaza, LA; Point Blank: Performance & Dance, State Playhouse, Cal State Los Angeles; Dance Without Borders, Japan American Theatre, LA;  Inside Out at the Far Bazaar, LA’s Alternative Art Fair.  Oliver has been curating, producing, and making performances since 1984.

Oliver was an Ahmanson Scholar at the California Institute of the Arts, where she received both her BFA and MFA.  She also attended the producing program at American Film Institute. 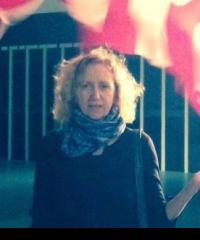