Catherine Lord, Professor of Studio Art and affiliated faculty, Department of Women’s Studies and Department of Visual Culture, is a writer, artist, and curator whose work addresses issues of feminism, cultural politics, and colonialism.  She is the author of the text/image experimental narrative,  The Summer of Her Baldness:  A Cancer Improvisation (University of Texas Press), the conceptual translation Sa Calvitie, Son Colibri:  Miss Translation (L’une Bevue) and (in collaboration with Richard Meyer), Art and Queer Culture, 1885-2005 (Phaidon Press, 2011). She is at work on a text/image project titled, The Effect of Tropical Light on White Men. Her critical essays and her fiction have been published in Afterimage, Art & Text, Artcoast, New Art Examiner, Whitewalls, Framework, Documents, Art Journal, GLQ, X-tra and Art Paper, Artforum and October, as well as the collections The Contest of Meaning,  Illuminations:  Women Writing on Photography from the 1850s to the Present, Reframings:  New American Feminisms in Photography , The Passionate Camera, Hers 3, Space, Site and Intervention:  Issues in Installation and Site-Specific Art, and Decomposing.  She was an essayist for the exhibition catalog,  WACK!  Art and the Feminist Revolution, as well as for the Marlene McCArt retrospective, I’m into you now. Her curated exhibitions include "Pervert," "Trash,"  “Gender, fucked,” and "Memories of Overdevelopment:  Philippine Diaspora in Contemporary Visual Art."  Her work as a visual artist was included in the 1995 inaugural biennial of Site Santa Fe, and has been shown at the New York Gay and Lesbian Film Festival, Post Gallery (Los Angeles), La Mama (NYC), DNJ and Thomas Jancar (Los Angeles), Manifesta (Murcia, Spain), and the Los Angeles Gay and Lesbian Center, among other venues.

Lord served as Dean of the School of Art at the California Institute of the Art, as chair of the Department of Studio Art, UC Irvine from 1990-1995, and as Director of the UCI Gallery from 1991-1996.  She was named the Shirley Carter Burden Visiting Professor of Photography at Harvard University in 2008, and she is the 2010 recipient of the Harvard Arts Medal. She has received fellowships from the New York State Council on the Arts, the Humanities Research Institute of the University of California, the Royal Botanic Gardens at Kew, the Norton Family Foundation, the Andy Warhol Foundation, the Creative Capital Foundation, the Durfee Foundation, the Rockefeller Center for Arts and Humanities, the California Community Foundation and Anonymous Was a Woman. 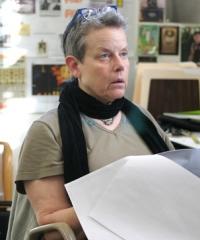