Antoinette LaFarge makes work that engages with the politics of virtuality, ephemerality, and role play through performance and installation, participatory media, net culture, and fictive art. She works and teaches using both analog and digital media, and she believes that computational literacy is a necessary part of the contemporary artist's skill set. Recent new media performance and installation projects include Far-Flung follows function (2013) Galileo in America (2012), Hangmen Also Die (2010), WISP (World-Integrated Social Proxy) (2009-10), World of World (2009), Chronovacuum (2009), Playing the Rapture (2008-09), Demotic (2004/2006), The Roman Forum Project (2003), and Reading Frankenstein (2003).  She has co-curated two groundbreaking exhibitions on computer games and art: SHIFT-CTRL: Computers, Games, and Art (2000) and ALT+CTRL: A Festival of Independent and Alternative Games (2003), the latter supported by an NEA grant.

LaFarge is associate editor of the anthology Searching for Sebald (ICI Press, 2007). Other recent publications include “Impersonation as Improvisation” in the Oxford Handbook of Critical Improvisation Studies (2013), "Eisbergfreistadt: The Fictive and the Sublime" (Visual Communication Quarterly, 2009), "A Meditation on Virtual Kinesthesia" (Extensions, 2007), and "Media Commedia" (Leonardo, 2005). She writes for the techno-feminist blog Difference Engines and for her own blog, art is all we have. She is working on a book about fictive art.

LaFarge is a longtime Associate of the Institute of Cultural Inquiry, a Los Angeles–based nonprofit that explores the visual methods used to document, categorize, expose, and conceal the events that define contemporary culture. Her involvement with the ICI includes co-organizing exhibitions, design and production of books on visual culture, and work on multi-year projects such as The AIDS Chronicles. In 2011, she produced the research project and exhibition Evidence of Evidence at the ICI. 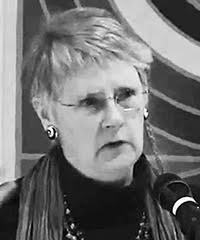